Global climate change is mentioned daily in the popular media. The dramatic images of polar bears on ice floes and melting ice sheets have been widely reported. Recently, the Today television show even broadcast live from the North Pole, the South Pole, and the equator, underscoring the remarkable technological age we are living in. The importance of the work of the polar explorers of the late 19th and early 20th centuries is often lost in the chronicling. These polar explorers were not only daring adventurers, but also remarkable environmental scientists who collected geographic, atmospheric, oceanographic, geophysical, and astronomical data which are perhaps more relevant today than ever as climatologists attempt to reconcile past and present environmental conditions. For example, Wood and Overland (2006) have reanalyzed atmospheric data collected during the first International Polar Year (1882-83) and have noted a strong North Atlantic Oscillation signature in these early Arctic records. The first International Geophysical Year (1957-58) actually began as the third International Polar Year (IPY). The 1957 IPY is quite familiar to many because of its national security motivation (reaction to the launch of the Russian satellite Sputnik) and the oceanographic data collected fortuitously during a strong El Nino event. The second IPY was conducted in 1932-33 and the fourth IPY is now underway (2007-08). The present IPY involves about 50,000 people, including 20,000 scientists, from 62 nations who are conducting over 200 scientific and outreach programs.

I have been fascinated by oceanography’s only Nobel Prize winner, Fridtjof Nansen, since I visited the Fram Museum in Oslo, Norway during my first foreign oceanographic meeting. Fram (meaning ‘Forward’ in Norwegian) is the polar ship which Nansen helped to design and then used for his oceanographic and polar expeditions. Nansen later allowed Raold Amundsen to use Fram for the first expedition to reach the South Pole in 1911, barely beating Robert F. Scott. Amundsen later led an expedition to the North Pole following the first led by Robert Peary and Matthew Hensen. As part of my Ocean-Atmosphere Processes (Geog3a) class, I highlight the many accomplishments of Nansen, a true Renaissance man. Fridtjof (meaning ‘Daring Viking’) Nansen, born in 1861, is considered by many to be the greatest of all polar explorers. He also excelled as a geographer, oceanographer, world-class skater (holding world records) and skier, historian, anthropologist, neuroscientist, artist, author, and, most importantly, diplomat and humanitarian. As an oceanographer, Nansen invented a water sampling bottle (Nansen bottle) that was commonly used until fairly recently. He discovered an important Arctic current and noted a phenomenon known as ‘dead water,’ which is a manifestation of internal gravity waves. During his polar explorations, he reported ‘dirty ice,’ which has significance for environmental change. Finally, he observed a veering of ice floes at 45 degrees to the right of the wind direction. Nansen described this then perplexing effect to Walfrid Ekman, who developed an elegant theory based on the observations. The Ekman theory, which predicted a downward spiraling of currents and net transport at 90 degrees to the right of the wind direction in the northern hemisphere, is now a cornerstone of physical oceanography (illustrated in Chamberlin and Dickey, 2007).

Fridtjof Nansen served the people of Norway and was able to obtain essential supplies from the U.S. during WW I when Norway was a neutral nation. He later served as Norway’s delegate to the League of Nations. He is thought to have saved several millions of lives through his diplomatic efforts on behalf of Armenian, Russian, German, Greek, and Turk refugees. Nansen was recognized with the Nobel Peace Prize in 1922. In 1938, the Nansen International Office of Refugees, which was created to advance Nansen’s humanitarian work, received the Nobel Peace Prize. The scientific legacy of Fridtjof Nansen continues to this day through the Nansen Environmental and Remote Sensing Center in Bergen.

Sled dogs were important for Nansen’s polar expeditions crossing Greenland and approaching the North Pole (his team made it to 860 16’N, the furthest north at the time of the 1895-96 expedition), as well as for the daring expeditions of Amundsen and other polar explorers such as Shackleton, Peary, Hensen, and Scott.During my lecture concerning the IPY and Nansen, two Great Pyrenees dogs (right) roam the classroom and are petted by the students.One of the dogs, Theodore Nansen (Teddy), is a 1-year old named for both Nobel Peace Prize winner and conservationist Theodore Roosevelt and for Fridtjof Nansen.Teddy’s loyal companion is a 5-year old AKC champion named Surfer Girl (aka Bikini and Kiki).Coincidentally, Nansen’s favorite lead sled dog was named ‘Kvik.’Kiki is shared with my friend, Terrie Strom, who breeds and shows champion Great Pyrenees.

Great Pyrenees originated in the Pyrenees Mountains, the rugged border region of southern France and northern Spain. They were, and still are, used as guard dogs for herders, were favorites of French royalty during the period of King Louis XIV (Great Pyrenees are often seen in paintings of the period), and now serve as therapy dogs. Great Pyrenees are also known for being bred with Siberian huskies to produce highly effective sled dogs and with St. Bernards to help save that breed. My lecture describes a variety of dogs that have been used for polar expeditions, sport sledding, and life saving and companionship at sea. Some of the breeds include Newfoundlands, Portuguese Water Dogs, Siberian Huskies, Samoyeds, and Poodles. I conclude with historical pictures of dogs that have gone to sea or resided at lighthouses with U.S. Navy sailors and U.S. Coast Guardsmen.

Though rather unconventional, large dogs in a UCSB classroom are bringing to life a bit of the history of the Age of Exploration by polar and oceanographic heroes who are too often forgotten in our fast-paced technology-driven world. (Photo courtesy of Christine DiStefano.)

Nansen, F., reprinted in 2001, The First Crossing of Greenland, University Press of the Pacific, Honolulu. 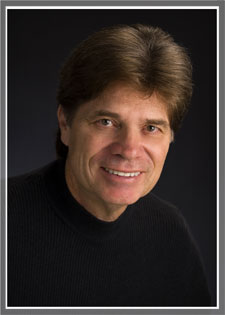 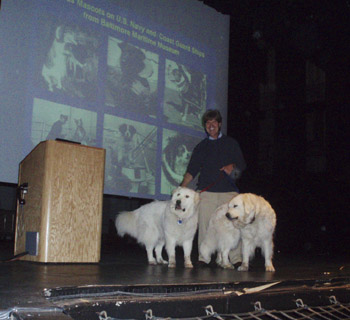